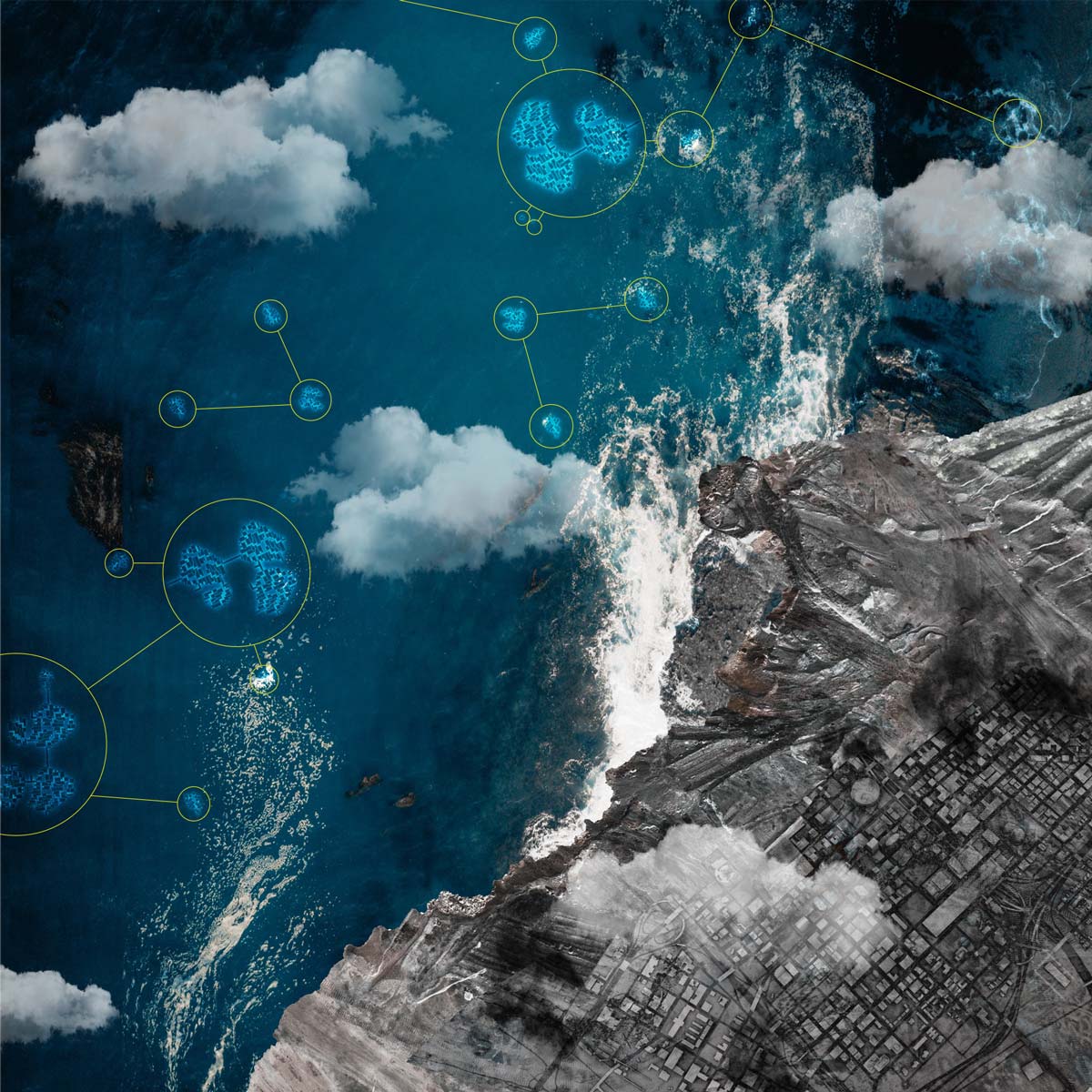 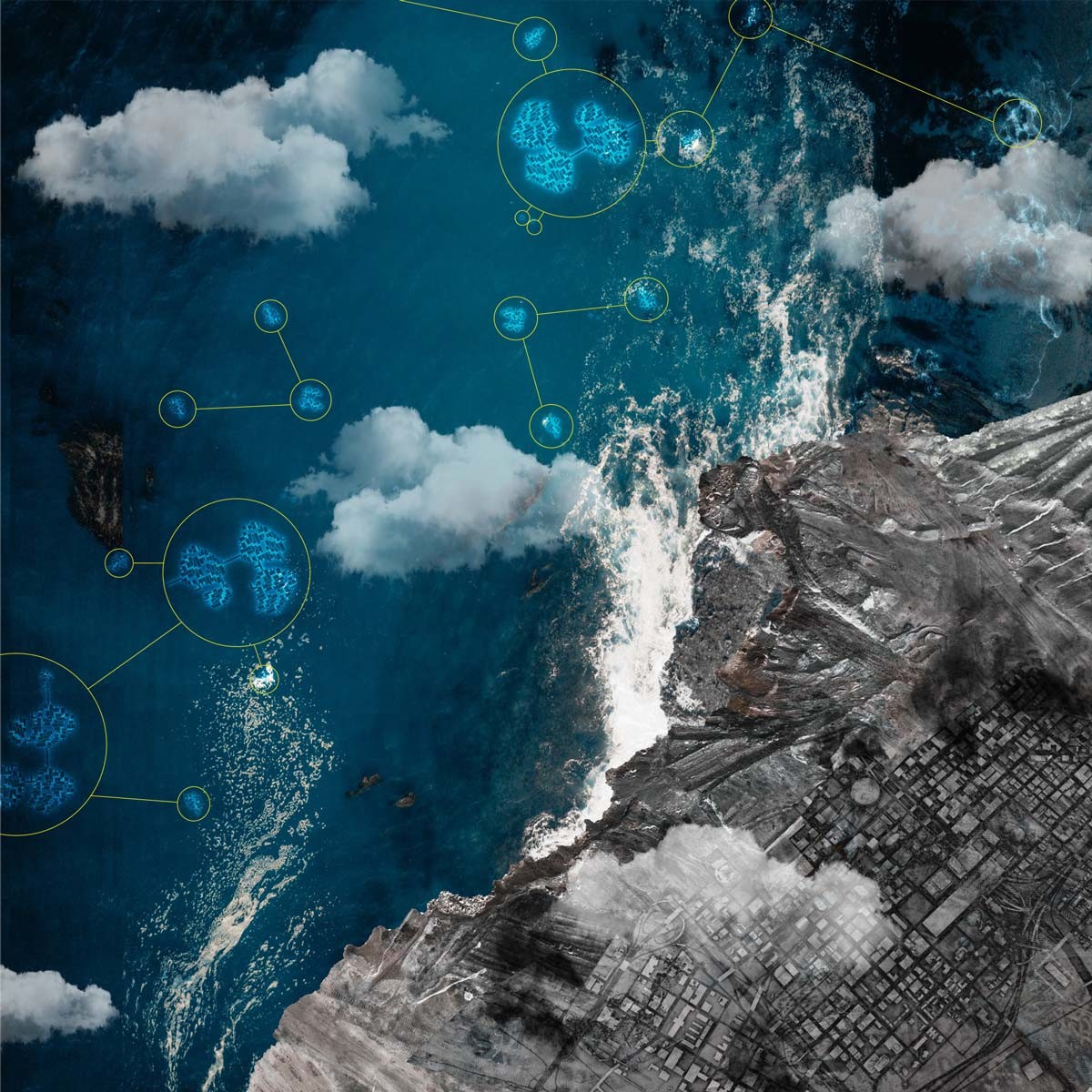 Global warming, brought on by climate change, is an impending threat to the inhabitants of our planet. In the last decade, glacier loss rates have tripled, and we continue to lose more ice mass at an alarming rate. The melting of the Greenland and Antarctic ice sheets is bleeding more than 127 billion tons of ice into the ocean, raising sea levels half a millimeter every year, according to NASA’s Global Climate Change study. Those rates are projected to surge soon, leaving little time for the world’s vulnerable coastal population to organize climate action responses.

The damaging role of human activity in the progression of climate change has all but ensured the possibility of disastrous flooding. As a result, climate adaptation and mitigation strategies are increasingly becoming a critical focus of the architectural profession. From predicting the manufacturing process on future homes to considering how social architecture will play a vital role in how we adapt, the future of buildings and, more specifically, homes will demand adaption to climate catastrophe through a tentative connection to the site and fixed infrastructure. “HOME Competition” is Part II of DRAW’s Climate Change Blog Series.

Expressed through the lens of Positive Impact Design, this project considers a future wherein, with a decrepit landscape that is no longer structurally or sustainably viable for homes, architecture has repositioned itself into an aquatic environment. This newfound territory requires the restructuring of the generation of power, the collection of rainwater, and the digestion of waste. In the envisioned community, the primary structural material is plastic, collected from the surrounding oceans and compressed into mold and pest resistant bricks. These modular components aggregate into a fixed base module that accommodates program modules for gathering, eating, sleeping, and bathing. Each module is structurally independent and poised on piles, which can be unclipped to move the base to another site. The plastic frame floats, rising and falling with the water levels and automatically leveling itself with an integrated gyroscopic leveling mechanism to damper the choppiness of the seas. The interchangeable program modules and modular system promote expansion and self-built construction; as families evolve or as entire areas undergo additional environmental disruption, entirely new communities can be assembled with relative ease.

“A Wandering Home” is a modest way of naming the project, given that the goal was not to understand or define what home is but instead to consider the relationship of a known habitat in an unknown future. 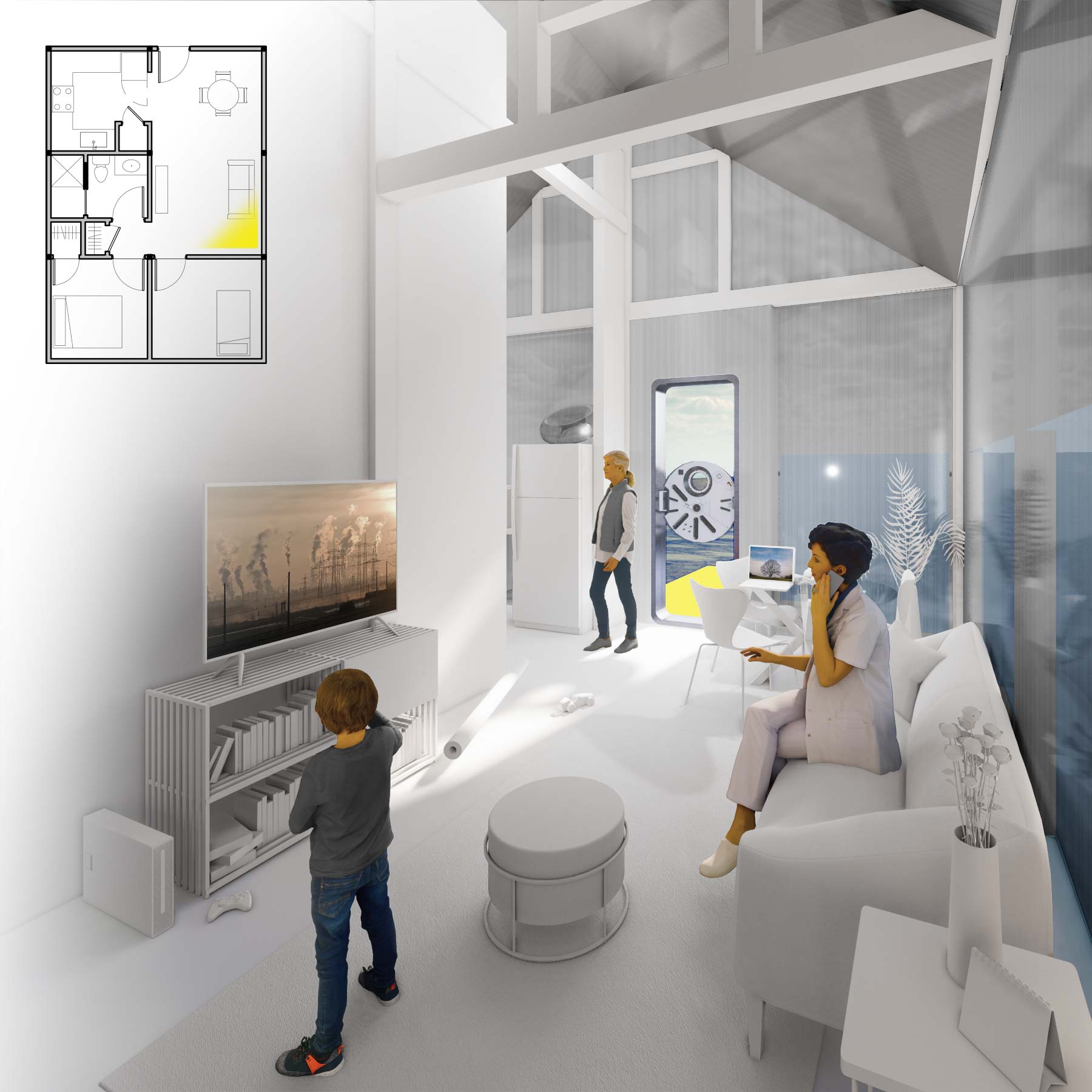 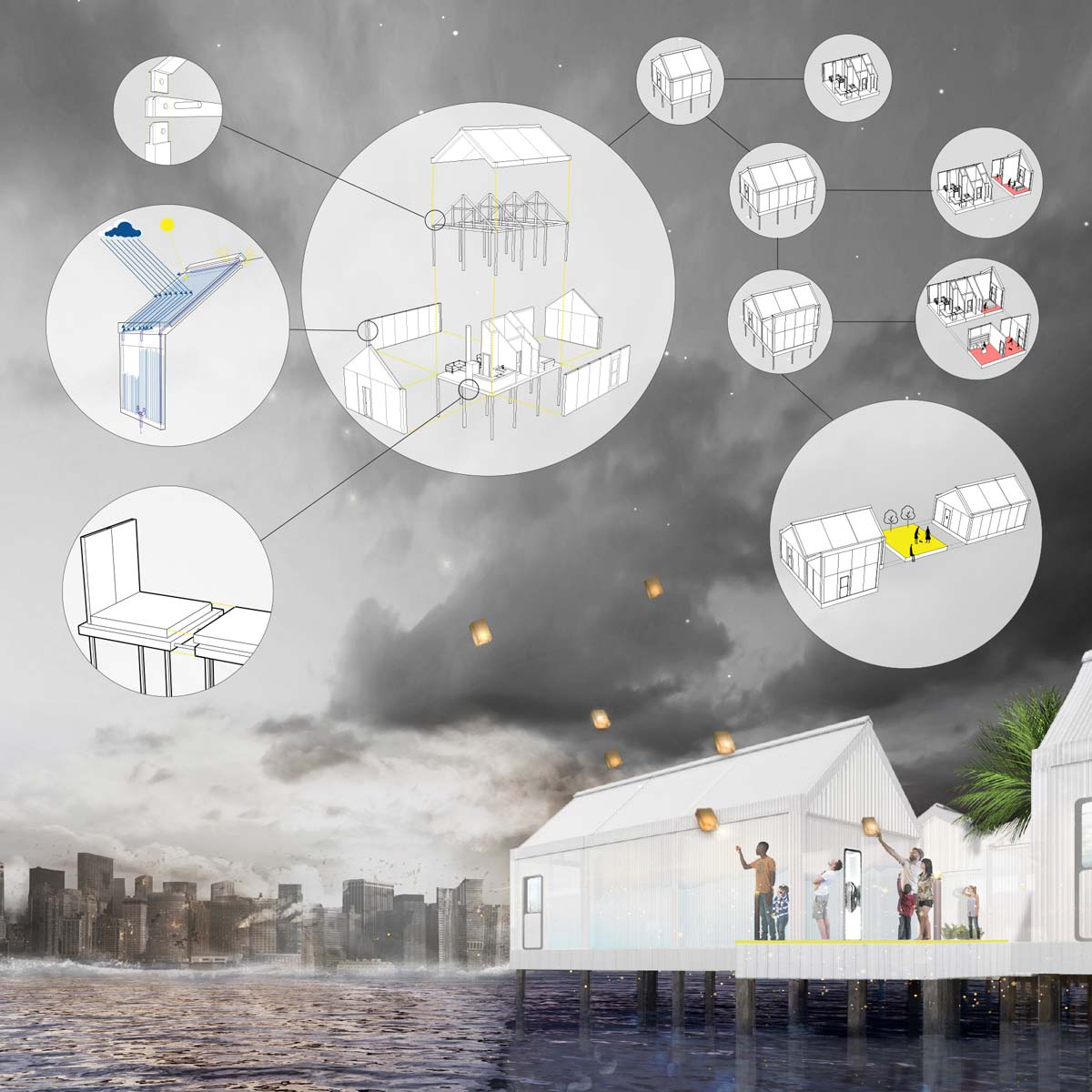 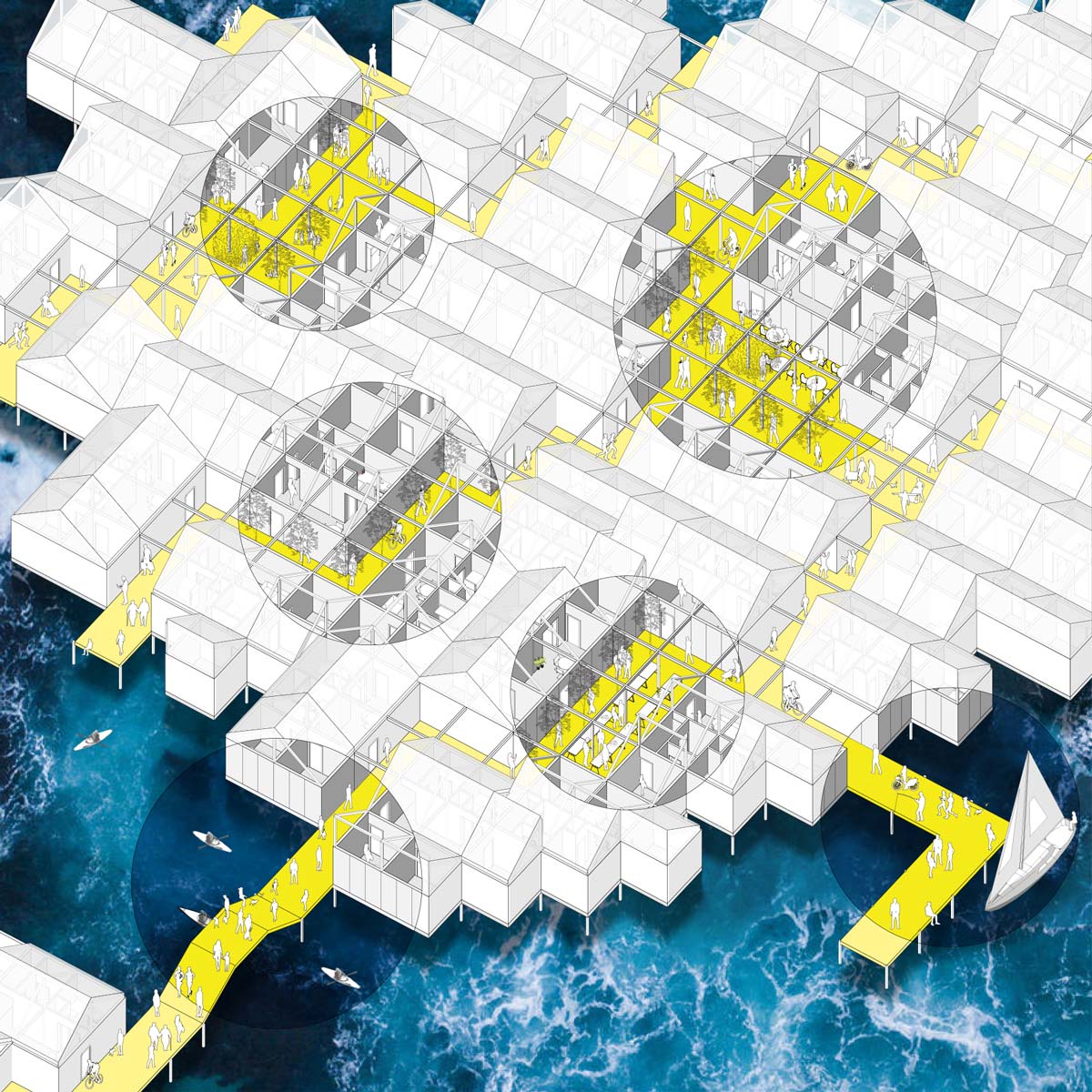