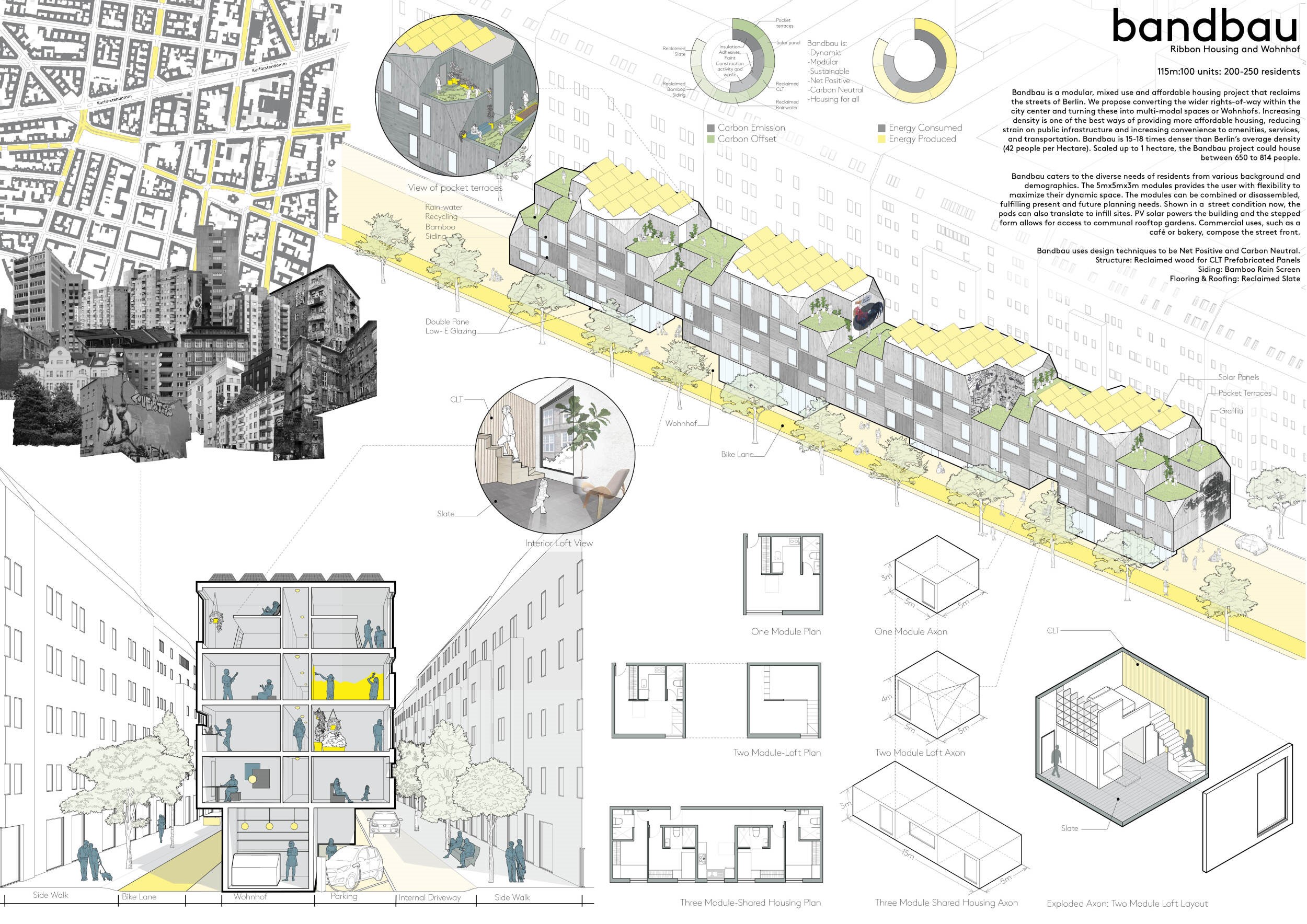 DRAW architectural designers participated in and submitted a proposal for the Berlin Affordable Housing Challenge competition hosted by Bee Breeders in mid-December. The panel was made of architects, planners, activists, and policymakers from Berlin, Denmark, the US, and Canada. Due to Berlin’s urban composition, affordable housing within the city is a critical necessity. Eight out of 10 city dwellers rent their homes, and rent has increased on average by 42% since 2016. The average cost of rent for a one-bedroom apartment in 2022 in Berlin is $1,470 (1393 EUR). When this cost is applied to 85% of Berliners, the spiraling cost of housing becomes detrimental to the city’s economy. Much like in the US, the housing crisis in Berlin is tied to a low inventory and an increasing demand for housing. This is where DRAW’s design to insert more housing comes into play.

DRAW’s entry was shortlisted, showcasing a design that called for a radical repossession of the streets, drawing on Berlin’s history as a medieval city.

Bandbau is a modular, mixed-use, and affordable housing project that reclaims the streets of Berlin. We propose converting the wider rights-of-way within the city center and turning these into multi-modal spaces or Wohnhofs. Increasing density is one of the best ways of providing more affordable housing, reducing strain on public infrastructure, and increasing convenience to amenities, services, and transportation. Bandbau is 15-18 times denser than Berlin’s average density (42 people per Hectare). Scaled up to 1 hectare, the Bandbau project could house between 650 to 814 people.

Bandbau caters to the diverse needs of residents from various backgrounds and demographics. The 5mx5mx3m modules provide the user with the flexibility to maximize their dynamic space. The modules can be combined or disassembled, fulfilling present and future planning needs. Shown in a street condition now, the pods can also translate to infill sites. PV solar powers the building, and the stepped form allows for access to communal rooftop gardens. Commercial uses, such as a café or bakery, compose the street front.

The concept – title ‘Bandbau,’ meaning ribbon building – would occupy the streetscape rather than an existing building’s lot. Since a modular unit was created for the building, the structure could be replicated over and over, weaving through the streets as the demand needed. The flexibility of the design means that neighborhoods can create the spaces they want for biking, public transportation, commercial spaces, and desired green spaces, benefits that are all compatible with this design. 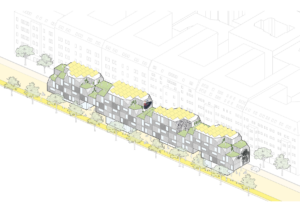 The overall form diagram shows how the building fits within the street and its relationship with the existing urban fabric.

Concern over the repurposing of streets was mediated by using only one 5mx5mx5m module in the center of the street. This creates one side that is perfect for a protected cyclist lane and another side that is enough room for parallel parking and one-way public transportation or car traffic. The center module is programmed as commercial space that faces the cyclist lane. The existing sidewalk remains untouched and provides a boundary for the initial stages of the design. It was important to retain as much historical material and to minimize disruption to the historic buildings as much as possible. Historically, these streets of Berlin were pedestrian-oriented, and this design allows some of those streets to return to the pedestrian realm. 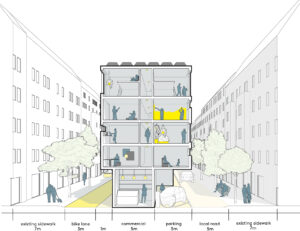 As seen in the section drawing above, DRAW’s design fits within the existing context.

The units themselves are designed to be 5mx5mx4m (16ftx16ftx13ft) cubes that could be replicated. The top floor is a perfect cube of 5mx5mx5m, allowing space for a loft. The units can be combined to create larger student units, single-family apartments, or remain solitary for a single person who might have just moved to Berlin or is recently transiting from unhoused to housed. The goal was to create housing that is affordable for a variety of people, meeting their needs and wants. 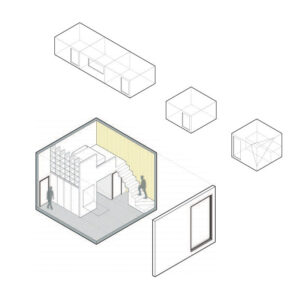 An axon of the interior layout of a single 5mx5mx4m unit. Another 3D view of the module layouts shows a four-bedroom unit (3 units that are 5mx5mx4m) compared to a studio unit.

The Cost of Living in Berlin

In Berlin 85% of People Rent their Homes

The New Tenement: Tradition and Modernity